The Highlands is a 460-acre residential neighborhood in the northwest corner of Wilmington, Delaware, bound by Union Street and Riddle Avenue to the East, Pennsylvania Avenue to the South, Rising Sun Lane to the West, and the Brandywine River to the North.

The neighborhood's bucolic, tree-lined presence belies a rich history as a bustling center of 19th-century industry complete with quarries, trolleys, and world-class innovation.

The upland setting on the highest elevation in the city offers picturesque views, a sloping landscape, thriving arbor population, and vigorous river activity. These traits have made it a desirable settlement location for centuries – not only for residents but also for industry and access to natural resources. 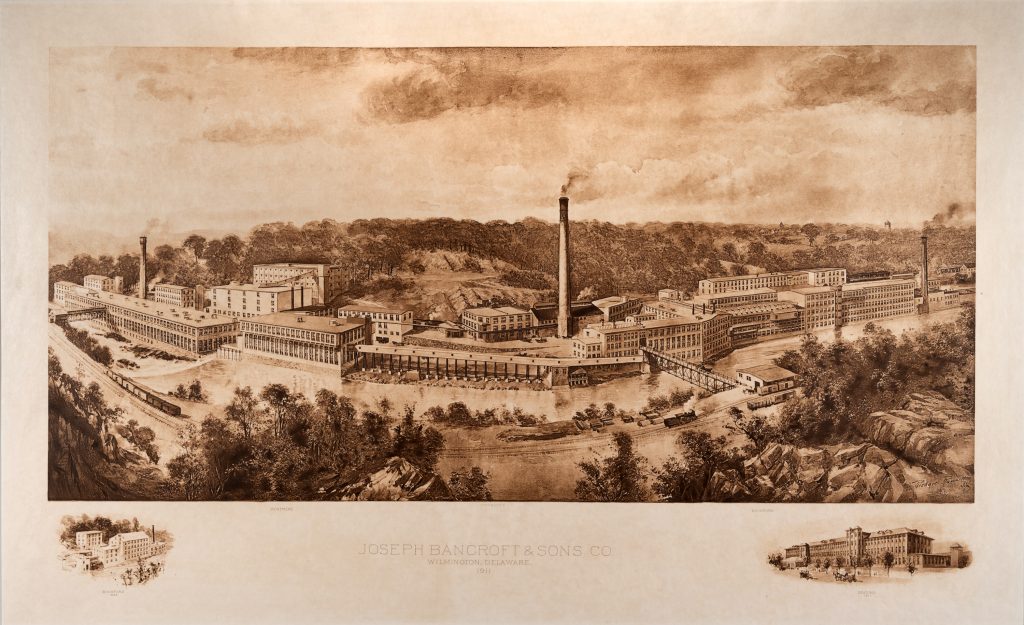 Bancroft Mills has been a powerful presence in the Highlands since 1831, as textile mill of international renown and today as adaptive reuse architecture. Much of what we know as "The Highlands" adjacent to the Brandywine is built on lands once belonging to the Bancroft family. Drawn by Richard Rummell, engraved by Littig and Company, New York.

Situated at the Atlantic Seaboard Fall Line, where the rocky Piedmont plateau descends into the sand of the coastal plain, the Brandywine River provided perfect circumstances for indigenous people to hunt, fish, and gather.  A population likely would have been in some area of the Highlands during the 12,000 years when the Delaware Valley was occupied.  After European contact, early industrialists were attracted to the area for its ideal geological and geographical features that created enough water power to operate sizable, profitable mills.

By 1787, Thomas and Joshua Gilpin operated the first paper mill in the United States. Their innovation to manufacture in a continuous roll was the subject of espionage and intellectual property theft.

In 1831, the Bancroft family began operating a textile mill just upstream from the Gilpin site. By the end of the Nineteenth Century, it was called the largest textile finishing plant in the United States and maintained national profile until the 1960s, notably as the sponsor of the Miss America pageant. The mill remained at some level of production until 1981.

Massive quarrying operations in the Highlands helped create the region’s built environment with its signature Brandywine Blue Gneiss (sometimes misnamed as “granite”). One Brandywine quarry was 800 feet wide and 100 feet deep. Others, including those operated by the Field and Scott families, stretched from the Brandywine to 16th Street near Bancroft Parkway.

Outside of its extensive 19th Century industrial activity, the Highlands consisted of open fields, a large oak grove; farmland, and a handful of estate homes belonging to some of the city’s most prosperous citizens.  It was a country area, a part of Christiana Hundred, just on the other side of Union Street, the city’s western boundary. Ultimately, the neighborhood’s primary industry would become real estate development.

The Birth Of Highlands

The birth of the modern Highlands begins in 1861, when Joshua T. Heald (1821-1887), a land developer and businessman who married into the prominent Pusey shipbuilding family, bought a sixty-ish acre tract from the Brinckle (pronounced Brinkley) family with the plan to extend the city grid system into Christiana Hundred and create the “best section of the city," including a grand boulevard and grand homes for the city’s elite.

Situated around the homestead we now know as Gibraltar and the Marian Coffin Garden, the "Old Brinckle Estate" was bound from about the Columbus Inn to what is now 19th Street to the North, Mt. Salem Lane to the West, and roughly today’s Woodlawn Ave to the East. Heald died just two months after his plan for the area was approved by the city. The combination of his plan and the decline of neighborhood industries -- as 20th-century business development centered more in Wilmington’s downtown – created opportunities for real estate development.

The neighborhood would take its recognizable shape between 1890-1920 after the city annexed the land in the late 1880s and during a boom that saw Wilmington’s population expanded by 55%.  Sixteenth, Seventeenth, and Eighteenth Streets were the first to be developed on the Old Brinckle Estate, with the Seventeenth Street boulevard shrunk from Heald’s grand original vision.

Two years later, in 1889, after nearly a decade of negotiation and controversy, William Poole Bancroft (1835-1928) donated the bulk of the land to create Rockford Park.  The 1891 sale of “The Kentmere Parcel” and other lands North of Delaware Avenue and West of Union Street to the Brandywine allowed the creation of Kentmere Parkway.  Delaware Avenue was extended from its Union Street terminus to Rockford Park.  Near the turn of the century, the Red Oak Road enclave was created.  Much of this development consisted of large lots with requirements for extensive curb setbacks and no allowance for subdivision.

William Poole Bancroft, a devotee of open space planning and its impact on harmonious living, had a grand vision to develop a pair of grand boulevards linking Brandywine Park to Rockford Park, and Rockford Park to Canby Park.  Other prominent families including duPonts, Fields, Laws, Riddles, and Scotts, joined him in selling or donating their land to contribute to the vision. Kentmere Parkway was completed in the early 1890s and Bancroft Parkway (so named after his death) was largely executed throughout the first quarter of the Twentieth Century. 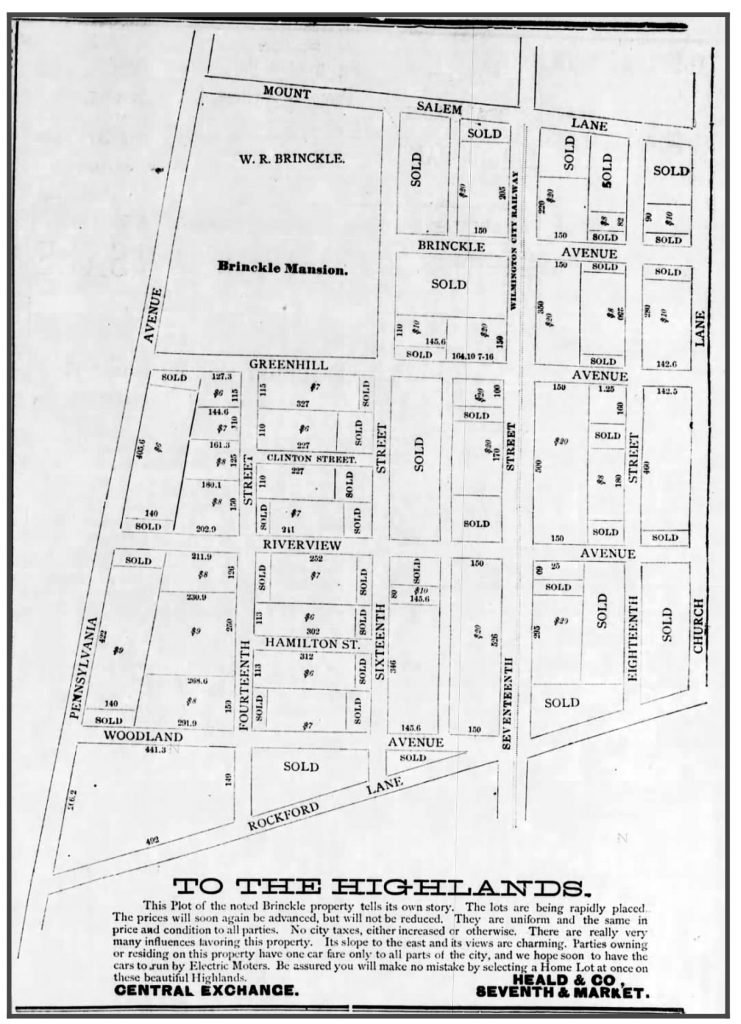 The 1887 city-approved plot drawing as presented in the Wilmington Daily Republican, June 18, 1887. Heald died just 2 months after the plan's approval.

Designed in the Roman Renaissance revival style by Philadelphia architect Adrian W. Smith, the building occupied an entire city block on what was known as the Kentmere Parcel. In the 21st Century the building was demolished and several homes were constructed within the original walls. Delaware Gazette and State Journal, February 18, 1892.

This image of Rockford Tower dates from no later than 1906, within five years of its completion. Author Constance J. Cooper identifies that "Theodore A. Leisen, the engineer for the park department, and the Philadelphia architectural firm of Baker and Dallett designed Rockfor Tower. Leisen (b. 1864), a civil engineer, worked for various city departments between 1891 and 1907, when he moved to Kentucky. He wrote the park department's report for 1895 in which the observatory was dirst described. Baker and Dallett cisisted of Louis C. Baker, Jr. (1859-1915), and Elijah J. Dallett, Jr, who began their careers with Frank Furness before forming their own partnership in 1888." Cooper's 1990 book, Rockford Tower, is the definitive work on the subject.

Of course, all this expansion required infrastructural upgrades, especially in the water supply. The solution was the iconic Rockford Tower, completed in 1901.  One of Wilmington’s signature architectural gems, the tower was designed by a City of Wilmington Park Department engineer and a Philadelphia architectural firm founded by two Frank Furness proteges.  It added to the visual appeal of the city’s newest section as a distinctive beacon at the city’s highest point.

Wilmington’s affluent citizens and executive workforce were drawn by the appeal of the Highlands, with community-minded elements like multiple churches representing different faiths, and spacious urban plans. Many selected prominent Wilmington or Philadelphia architects to design custom homes in the then-contemporary revivalist styles. As a result, the Highlands boasts a vigorous display of architectural styles popular in the first quarter of the Twentieth Century.

The Bancrofts remained a prominent force in the area through most of the Twentieth Century, not only as an employer but also as a provider of developable property. The gradual development of its significant land holdings would define the Highlands’ post-World War II growth.

In 1931, Samuel Bancroft donated 11 acres of land (and his definitive collection of Pre-Raphaelite works) to locate The Delaware Art Museum near the intersection of Kentmere and Bancroft Parkways, giving the Highlands a cultural center at the gateway to Rockford Park.

After World War II, the Wood Road development, behind the art museum and centered around a stately Bancroft home, brought to the area the mid-century modern style, continuing the trend of custom-designed homes while offering a sharp contrast to the Highlands’ more traditional earlier designs.

Use of Bancroft land near the Brandywine enhanced the neighborhood with increased population and expanded socio-economic diversity by adding apartments, condominiums, and single-family homes at lower price points than many of the nearby manses or even the charming earlier townhouses and duplex homes of, for instance, Eighteenth or Fourteenth Streets. The development of the Bancroft Mills property continues to this day as the mill site itself experiences adaptive reuse into condominium and townhouse living.

For Well Over A Century

For well over a century, the Highlands neighborhood has mixed captains of industry, heirs, and heiresses, entrepreneurs, governmental leaders, artists, judges, investors, and other of the most prominent Wilmingtonians with a core of upper-middle-income professionals and leaders.  Throughout its history, the neighborhood has been almost entirely white, and, for many decades, would have been entirely so.

Delaware’s lack of open housing laws allowed such prejudicial Jim Crow practices as redlining and other systems of marginalization to conspire to keep African American families out of the Highlands and generally relegated to the inner city.  For much of the Twentieth Century, the African American community’s presence in the Highlands was in the form of household support for the white residents.

Many homes included live-in space for domestic help, whether white or black, as was common in American home design at the time. The first African American family believed to have purchased a home in the neighborhood was one of Wilmington’s first Black attorneys, on Woodlawn Avenue, shortly after the federal Civil Rights Act of 1968 outlawed redlining.  Such racist restrictions lasted into the 1980s.

This image shows the Red Oak Road and Willard Street enclave no later than 1907, during its eaarly period of relative isolation from the rest of Wilmington. The homes at 9 and 11 Red Oak Road are in the foreground, with 2405 and 2409 Willard Street to the right. A corner of 10 Red Oak Road (sometimes identified as 2501 Willard) peeks out from behind some trees. The old Oak Grove is at the foot of Rockford Park to the left of the image and the Delaware River can be seen in the background.

Nineteenth Century developer Joshua Heald was in the unusually luxurious strategic position of owning both the developing real estate and the nearby trolley line. He was therefore able to plot the transit route to run fully up Seventeenth Street, which was intended as the area’s central attraction. This approach gave easy access to prospective buyers and showcased the development opportunities he was offering as people travelled. The idiosyncratic route survives today. Image from post card, c 1920s.

Highlands History Is Everywhere We Look

Whether the last remnants of the old Oak Grove, the Marian Coffin Garden and the remaining stone buildings around it, the still-visible quarry stones along Field Road, the urban design layout, and the vernacular of early Twentieth Century American architecture and more historic buildings. We are surrounded by our past even as we envision our futures.  Through a succession from open space and indigenous populations, to early industrial capital, to its (apparent) ultimate destiny as the city’s idyllic northwest neighborhood, the Highlands endures as one of Wilmington’s most appealing spaces for living, recreation, and interaction with the natural environment.  Just look up!

Vince is a graduate, former Trustee, and former faculty member of the Tatnall School (DE).   His prior professional appointments include Associate Head of The Ellis School (PA) and Associate Head of School for External Affairs at West Nottingham Academy (MD).

He is active in his local community of Wilmington, Delaware.  His writing about local history has been published by Delaware History Journal and Cedar Tree Books, and presented at the Baseball Hall of Fame in Cooperstown, NY.